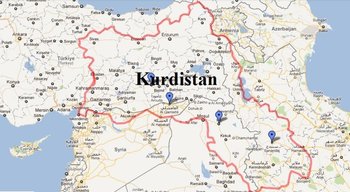 ”The Kurds have no friends but the mountains.”
— Abdullah Öcalan
Advertisement:

Kurdistan (Kurdish: کوردستان) is a region in Western Asia divided between Turkey (Northern Kurdistan), Iraq (Southern Kurdistan), Syria (Western Kurdistan) and Iran (Eastern Kurdistan), inhabited by Kurds, as the name implies. The Kurdish languages are part of the Indo-European family and belong to the Iranian subgroup, including Persian, Pashto, and Baloch. They have been a part of many Iranian empires throughout centuries, but they have their own separate culture and languages, and Turkey has the largest Kurdish population of the four countries at about 14.3 to 20 million. Despite this, they are a stateless nation, and at around 36.4 to 45.6 million people, they are the largest ethnic group in the world without their own country, and the fourth largest ethnic group in Western Asia after Arabs, Persians and Turks.

The name "Kurd" is a Persian word and originally referred to any nomadic tribes inhabiting the Zagros Mountains. The ethnogenesis of the Kurds started in the late 1st millennium CE, around the time of Islam's expansion into the Iranian Plateau. If you ask them, however, they claim that they are descendants of the Medes, an ancient Iranian people who built an empire in Northwest Iran around the 7th century BCE; their traditional calendar is even dated from 612 BCE, the year of the Median invasion of Assyria. There is no evidence to prove or disprove this claim, though the Median language was probably a sister language to Kurdish (as opposed to Persian, with which it was a cousin). As a whole, they are a heterogeneous nation with varied ancestry and speak mutually unintelligible languages, but they still recognize a sense of shared history. The most famous Kurd in history (in the West, anyway) is no doubt Saladin, who retook the Levant from the Europeans during the Second Crusade and is considered a hero in the Muslim world, on par with Mehmed the Conquerornote The guy who conquered Istanbul/Constantinople.

The majority of the Kurds are adherents of Islam. Iraqi, Syrian, and Turkish Kurds are primarily Sunni Muslims, whereas Iranian Kurds are primarily Shia (although there is a significant Sunni community in the region bordering Turkey). Before Islam, the Kurds were theorized to adhere to the ancient faith of Yazdanism (also known as the "Cult of Angels"). Though Yazdanism is now extinct, syncretism of it with Islam and other faiths have produced two independent religions: the 12th century-era Yazidism and the 14th century-era Yarsanism (or Ahl-i Haqq). Currently, Yazidis mostly live in Iraq, whereas Yarsanis live in Iran.

During the early modern era, the Kurds' homeland was contested between Ottoman Turkey and Safavid Persia. Thousands of Kurds were resettled to Khorasan during the reign of Shah Abbas the Great, since they staged many rebellions and their loyalty to Persia was questionable (as stated above, most of them are Sunni Muslims and had sympathy with the fellow Sunni Ottomans). To this day, there is a large Kurdish community in Northeast Iran (mainly in the province of North Khorasan). The ones who remained behind converted to Shiism in large numbers and include the Feyli, who are pro-Persian and in the present much less involved in the Kurdish civil rights movement than their brethren. On the other side of the border, the Ottoman Kurds were mostly left to sort their own affairs and established vassal states to govern themselves. The Ottomans only really began to get involved in the late 19th century, resulting in the birth of Kurdish nationalism.

The Kurds do not have a state now, but that does not mean they never tried. It began with World War I, when the Ottoman Empire dissolved. The Kurds were unhappy with the radical secularization (since they are devout Muslims) centralization of authority and rampant Turkish nationalism that was taking place in the country at the time, due to it threatening to marginalize them as well as the power of local chieftains and Kurdish autonomy. Around 700,000 Kurds had been forcibly deported by the Young Turks during the Armenian genocide, and almost half of them died. Some Kurdish groups sought the confirmation of Kurdish autonomy and self-determination in the Treaty of Sèvres, but the Turkish War of Independence prevented that. Kurdish revolutions were suppressed by the Turks and Iranians. British-backed Kurds did managed to declare independence and create the Republic of Ararat in Eastern Turkey on October 28th, 1927 or 1928, but it was quickly defeated and taken over by the Turks in September 1930. A Kingdom of Kurdistan existed in Iraq from September 1922 until July 1944, being defeated by the British and given back to Iraq with the provision for special rights for Kurds. A Soviet-sponsored Republic of Mahabad briefly existed in Iran in the 22nd of January, 1946, but quickly fell later that year.

Following several large scale Kurdish revolts in the 1920s and 1930s, Turkish Kurdistan was put under martial law and many Kurds were displaced, with the Turkish government also encouraging resettlement of Albanians from Kosovo and Assyrians in the region to change the make-up of the population. The Kurds weren't happy at Ankara for a long time after this, and the 1960 Turkish coup d'état halting their move towards integration in the Turkish government in the 1950's didn't help either. Eventually, the PKK (Partiya Karkerên Kurdistanê), also known as the Kurdistan Workers' Party, was formed in the 1970s by Kurdish nationalists influenced by Marxist political thought, and has been involved in an armed struggle against the Turkish state since 1984 for cultural and political rights and self-determination for the Kurds, with open war between the PKK and Turkish military occurring from 1984 to 1999. During that period, the Turkish government banned anything that has the word "Kurd" in it, prohibited the Kurdish language, and committed human rights abuses. Restrictions were gradually relaxed come the Turn of the Millennium, with the media being allowed to broadcast in Kurdish and the language being allowed to be taught as an elective. Nevertheless, the central government is still repressive and the insurgency has not yet stopped.

Meanwhile, in Iraq, during the Iran–Iraq War, a civil war between the Arabs and Kurds broke out due to the regime's implementation of anti-Kurdish policies, which resulted in the al-Anfal Campaign: the mass murder of hundreds of civilians, the wholesale destruction of thousands of villages and the deportation of thousands of Kurds to southern and central Iraq by the government. The most infamous attack during this campaign was the incident in Halabja in 1988, which killed 5,000 civilians instantly. The Iraqis recaptured Iraqi Kurdistan after the collapse of its uprising in March 1991 and more than a million Kurds escaped to Turkey and Iran, with 20,000 dying in the process. Following The Gulf War, the Kurds captured Erbil and Sulaymaniyah and established the Kurdistan Regional Government. After the fall of Saddam Hussein, the situation improved more, with the central government recognizing the legality of the KRG and the presidency of Iraq (currently held by Sulaymaniyah-native Barham Salih) being given to the Kurds under a power-sharing agreement. Nowadays, the relationship between the Iraqi Kurds and Arabs are still chilly, but nowhere near as sub-zero as the time of Saddam. Iraqi Kurdistan is currently the only place in the world where the Kurds largely and legally govern themselves.

In Syria, Kurds make up the largest ethnic minority, and the Syrian government have employed techniques to suppress their ethnic identity like various bans on the use of the Kurdish language, refusal to register children with Kurdish names, the replacement of Kurdish place names with new names in Arabic, and the prohibition of businesses that do not have Arabic names. Around 300,000 Kurds were deprived of social rights, though the Syrian government gradually softened under pressure of the international community. Since the start of the Syrian Civil War in 2012, the Kurds have effectively been governing themselves, establishing the semi-autonomous region of Rojavanote Full name Democratic Republic of Northern Syria in parts of Syrian Kurdistan. Ironically, the Kurds' and the Syrian government's relationship actually improved during the war; instead, their enemy, following the defeat of the Islamic State in 2017, is Turkey, which considers the Syrian Kurdish YPG (Yekîneyên Parastina Gel, "People's Protection Units") militia, which forms the backbone of Rojava's army, as an offshoot of the PKK and is determined to stamp it out from its border. This standoff culminated with the invasion of Rojava by Turkey and its Syrian rebel allies in October 2019, something that the United States gave a tacit approval for in spite of its previous alliance with the Kurds in combating the Islamic State. As a result, the Kurds had no choice but to call the Syrian government to help reinforce defenses, undermining and putting doubt its autonomy.

Needless to say, Kurds have had it rough. The Iranian government have at least treated them better than the Turkish, Iraqi or Syrian governments, however, due to their shared history and being cultural and ethnolinguistical relatives. Generally, most Iranian Kurds do not aspire for an independent state, as they are well-integrated into the Iranian political life, and their language is used much more openly than the period before the 1979 Revolution (regardless of what it has done in other venues, the current Islamic government is credited for scrapping the blatantly Persian supremacist policies of the Pahlavi era). Nevertheless, Iran is opposed to separatism and has run into problems with Kurdish nationalists, notably in the Iran crisis of 1946, which saw the brief establishment of the Republic of Mahabad, and the Iranian branch of the PKK, PJAK (Partiya Jiyana Azad a Kurdistanê‎, "Kurdistan Free Life Party"). 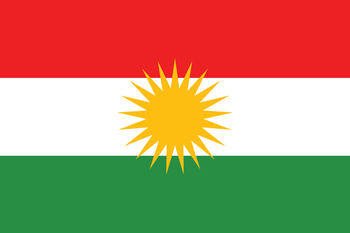 This flag is used by Kurds as a symbol for the Kurds' desire for independence, and is the official flag of Iraqi Kurdistan. It consists of red, white and green stripes, with the red stripe symbolizing the blood of the martyrs and the continued struggle for freedom and dignity, the white stripe representing peace and equality, and the green stripe expressing the beauty and landscapes of Kurdistan as well as life and vitality, with a blazing golden sun emblem (Roj in Kurdish) at its center. The yellow of the sun represents the source of life and light of the people, and the sun has 21 rays, equal in size and shape, with a single odd ray at top and the two even rays on the bottom, representing March 21, Newroz. Number 21 is a venerated number, standing for rebirth/renaissance in the ancient and native Kurdish religion of Yazdanism and its modern offshoots, and the sun is an ancient symbol.