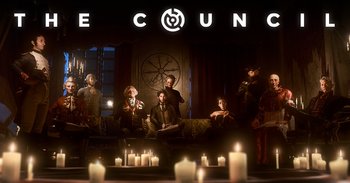 The Council is a historical Episodic Adventure Game developed by Big Bad Wolf and released by Focus Home Interactive in 2018.

In an alternate 1793, Louis De Richet is a member of a secret society called The Golden Order, which deals with the occult. Louis finds himself searching for his mother on a private island owned by the mysterious philanthropist Lord William Mortimer. She — along with several other luminaries of the period — was invited there to discuss and influence current events, but her sudden disappearance sparked fears of a conspiracy. Now, her son must step up, out of her shadow, and untangle the secrets and clues hidden on the island to find her.

Inspired by TellTale's TV-like games, it has a heavy emphasis on dialogue and story above all else. An RPG system of skills, such as linguistics or occult knowledge, helps Louis navigate the social jungle and uncover clues as he searches for his mother.

The game consists of five episodes:

Not to be confused with The Council of Hanwell.