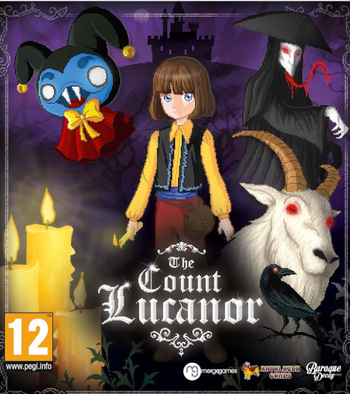 The Count Lucanor is a horror-exploration game developed by Baroque Decay, and released on March 3rd, 2016. Using a blend between 8 and 16 bit style graphics and gameplay, the game takes its inspiration mainly from properties such as The Legend of Zelda, Silent Hill, and Yume Nikki.
Advertisement:

The story of the game is very much set up as a Fairy Tale, but deliberately harkening back to the genre's old and dark roots. A young boy named Hans has just turned ten, but he and his mother are too poor to properly celebrate his birthday. Fed up with this lifestyle, Hans decides to leave home in search of treasure and adventure. Before he leaves, his mother gives him his grandfather's cane, some cheese and three pieces of gold to help him on his way. Wandering the woods, Hans eventually stumbles across the castle of Count Lucanor, a wealthy nobleman seeking an heir to inherit his fortune.

The game is available for purchase on Steam here

The Count Lucanor contains examples of: