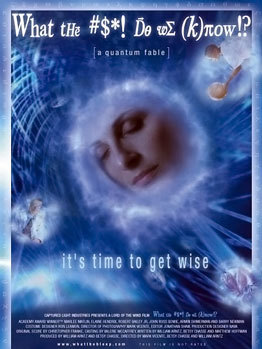 Filmed to promote a new age philosophy based on a very, very broad interpretation of quantum physics, the movie was funded by J. Z. Knight and heavily features commentary from 'Ramtha', an ancient Atlantian general who is apparently speaking through Knight. The movie features other proclaimed scientists who either have unrelated degrees or claim to have been taken out of context.

It follows a vague documentary format, switching between commentators talking about: the implications of Quantum physics and consciousness altering reality [seemingly in radical and pretty much straight up magical ways]; a deaf photographer with anxiety issues named Amanda, who starts to experience reality through other perspectives while living with her rather out-there sister; as well as some experts in the field going over their experiments and findings.

It emphasizes different perceptions of reality and how our perception of reality can alter it, claiming that bad things happen to us because we choose to play the victim and Amanda's anxiety disorder seems magically cured after she finished destroying an image of herself in the mirror and starts thinking positive.