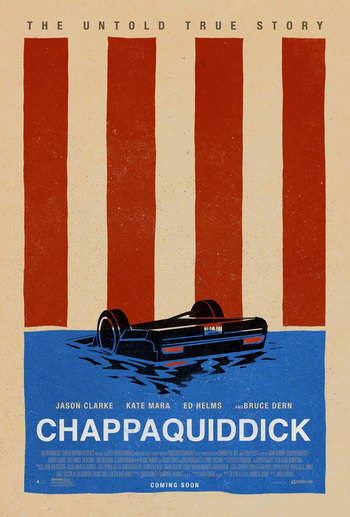 It is the summer of 1969. Ted Kennedy, the youngest of the famed Kennedy brothers, is a political rockstar. Already an established senator from Massachusetts, he made history that January by becoming the youngest majority whip in U.S. Senate history. There are rumblings about how he might eventually run for President in 1972, following in the footsteps of both his brothers John and Robert Kennedy. But at the same time, Ted Kennedy is privately struggling to maintain the legacy established by both his legendary brothers and his domineering father.

In July of 1969, Kennedy and a coterie of his friends (as well as former members of his brother Robert's 1968 presidential campaign) retreat to the Martha's Vineyard getaway of Chappaquiddick Island for a weekend of fun and celebration. Late on the night of July 18, Kennedy and Mary Jo Kopechne (a member of Bobby's campaign staff) leave a party and drive to the beach.note In his sworn testimony Kennedy insisted that he was giving Kopechne a ride back to the ferry and the hotel on the mainland. He said he took a wrong turn and headed to the beach by mistake. Skeptics of this story noted that Kopechne left her purse and hotel key at the party. In the movie Kennedy drives to the beach on purpose. Kennedy loses control of the car as they approach a rickety, guardrail-free bridge over a tidal pond, and the car goes off the bridge and into the water. While Kennedy was able to escape the crash, Kopechne was unable to resurface, and would die in the car overnight. What followed was a national scandal that changed the course of presidential history, intimately exposing the broad reach of political power, the influence of America's most celebrated family, and the vulnerability (and political destruction) of Ted Kennedy, the youngest son, in the shadow of his family legacy.

The film, which premiered at the Toronto International Film Festival in 2017, was widely released on April 6, 2018.