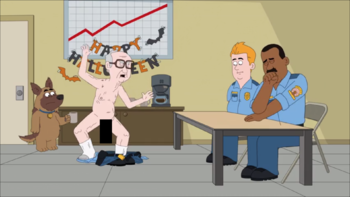 In the actual show, this sh*t isn't censored.

Bullet: You know some poor fella in Korea had to animate that?

While Brickleberry wasn't without it's grosser moments, Paradise P.D. make its spiritual predecessor look like Peppa Pig in comparison, as this show takes everything gross and offensive about the previous series and cranks it up to sixty nine.

Being a Netflix original, showrunners Roger Black and Waco O'Guin don't need to worry about the Censorship Bureau, so unlike with their previous work, they're allowed to go full throttle with showing off all the sex, nudity, violence, drugs, and racism their cold and shriveled hearts desire. This article will focus mostly on the "sex and nudity" aspect, though full disclosure, this will overlap.

Ass on the Line

Tucker Carlson is a Huge Dick

The Father, The Son, and The Holy Post-It Note