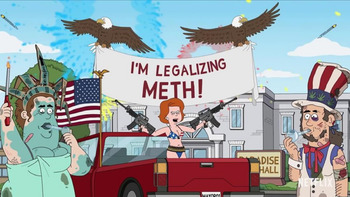 Sweet land of liberty
As a glowing example of All Adult Animation Is South Park (just like its predecessor, Brickleberry), Paradise PD relies heavily on Take That!, Crosses the Line Twice and Nausea Fuel. And, at times, it can be hilarious, as seen below.