What An Idiot / Brickleberry

Steve: (to Denzel) How many [stars in space] do you think there are?
Denzel: More than you can count, Steve.
Steve: Wow, 92.
Denzel: You are a stupid motherfucker. 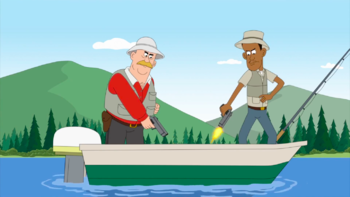 Cartoon charactersWarning  Common sense not included, keep firearms out of their reach.
Brickleberry usually has at least one "What An Idiot" moment in every episode of the show, what given their Loser Protagonist Steve Williams always screwing things up and making bad decisions all the time yet the rest of the main cast also commit random acts of stupidity as well.
Advertisement: