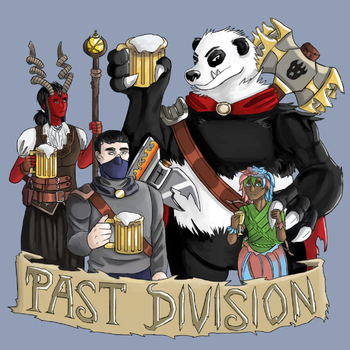 Past Division is a Dungeons & Dragons actual play podcast hosted by the gaming group Company of Fools. The story centers around four recently-dead misfits—the dwarven cleric Drake Hothands, the tiefling chronomancer Lucky Twice, the carolili tarocchi Lolli Rose, and the bearkin shinobi Peter Panda—their deaths, and their subsequent recruitment by the five Guardians of Time. The podcasts follows them on their missions, and the people they meet on their adventures.

A side podcast following a different party began in November of 2017. The podcast is called Time To Stop, and the party is made up of a human monk named Bojing, a half-elf warlock called Stephen, and a half-orc barbarian named Toren.

The podcast is hosted on SoundCloud, and can be listened to here