Tidings, my comrades, we've done it again
The dawn she is breaking, our pints at their end
By morning's cruel light must our sails ascend
To fly far from our families, lovers and friends... 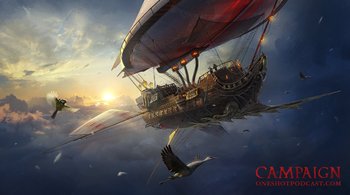 There are no kings. Take flight, heroes.

Long ago, mariners sailed the seas of the world of Speir — but since the stars fell, the seas turned deadly and the seasons went feral, those days are long gone. Now, instead, the skies are braved by Sky Jacks, crossing the world in airships with featherweave sails. Among these ships is the Uhuru, captained by the notorious and charismatic pirate Orimar Vale — but Vale has a secret, which only a few of his crew are aware of...

Campaign: Sky Jacks is the second story from the Campaign Podcast, a spin-off of the One Shot Podcast. Unlike its predecessor, Sky Jacks takes place in an original Sky Pirate setting inspired by the music of The Decemberists and the card game Illimat, elements of which are incorporated into the Genesys

roleplaying system the players use.

The first episode of the podcast contains a major First-Episode Twist that is key to the main plot. All spoilers for this are unmarked. You Have Been Warned!

Health to the strangers who've ever been kind
And once for our friends ne'er to rise
Twice to the dearest we're leaving behind
Who know we can never deny
The call of the sky...