Film / Christmas with the Kranks 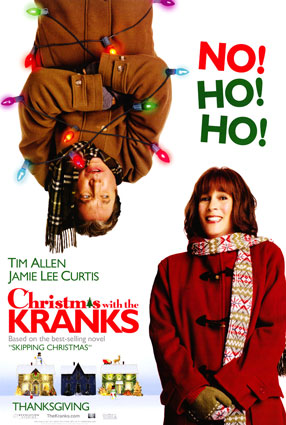 A 2004 comedy film based on the novel Skipping Christmas by John Grisham, directed by Joe Roth and scripted by Chris Columbus (Home Alone).

Blair Krank (Julie Gonzalo), the daughter of Luther and Nora Krank (Tim Allen and Jamie Lee Curtis), departs for a Peace Corps assignment in Peru, where she'll be during the holidays. The Kranks, along with their entire neighborhood, have always made a huge deal of celebrating Christmas with decorations and parties, but after their daughter leaves and they realize they spent over $6,000 last year to celebrate, this year they elect to go on a cruise in the Caribbean instead. They won't be celebrating Christmas this year like they'd always done previously — no decorations, no parties, no gifts, no fiberglass snowman on their roof...

In the end, Blair rings and informs them that she's coming home for Christmas with a new fiancé who has never celebrated it before and wants to know what it's like, forcing Luther and Nora to admit to their neighbors that they were "wrong" and "being selfish"...so they help them scramble a Christmas party together at the last minute. The closing shot is of the two embracing and agreeing that skipping Christmas was a bad idea.

Luther: Five minutes ago, I was a genius.
Nora: Yeah, well, now you're an idiot.