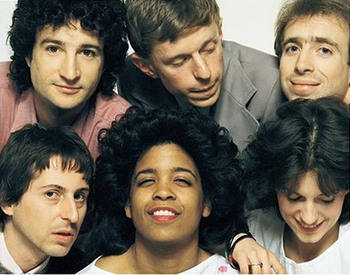 The Waitresses were a unique New Wave group formed in Akron, Ohio. While they’re commonly thought of as a One-Hit Wonder in retrospectives, the Waitresses actually have two major contributions to pop music - their smirking, man-eating pop number "I Know What Boys Like," and a standard of Christmas Songs, "Christmas Wrapping."

While the Face of the Band was the sassy Patty Donahue, the group was masterminded by veteran songwriter Chris Butler. He’d been a sociology major at Kent State University, and was actually one of the students fired on by the Ohio National Guard in the infamous Kent State shootings in May of 1970 (the same incident that helped shape the band Devo into who they are today). Butler was in various groups through the 70s, such as the Numbers Band (a.k.a. 15-60-75), and by the time he was putting the Waitresses together, he’d just endured the breakup of experimental new wave outfit Tin Huey, who Warner Brothers thought were going to be a big smash, but weren’t.

Butler had a song he’d written from a woman’s point of view, "I Know What Boys Like," and he got a woman he met in a bar, Patty Donahue (who had no formal musical training to speak of, but had been a waitress once) to sing lead vocals, with former Tin Huey member Ralph Carney on saxophone. Shopping the recording he made to various labels, the song finally got the Waitresses signed by ZE Records (home of Suicide and Lydia Lunch). Normally, this would be a cause for celebration for any band, but therein lied the problem: the "band" didn’t exist yet. Butler spent the last of his money on a bus ticket for Donahue to come to New York, and from there, they hastily arranged a band featuring unemployed New York musicians, featuring (among others) ex-Television drummer Billy Ficca and free jazz saxophonist Mars Williams.

With the Waitresses finally an actual band, they assembled an album, Wasn’t Tomorrow Wonderful? which eventually wound up being released on Polydor Records. Butler wrote all their material, with a lot of slice-of-life content that he referred to as "hypernormalism," which was all put over by Patty Donahue’s half-spoken, half-sung, all-Deadpan Snarker vocals. The album peaked at #41, and the big single "I Know What Boys Like" reached #62 in America, while being a much bigger hit in Australia, hitting #14. They followed this up with an EP, I Could Rule the World If I Could Only Get the Parts (the title taken from a Tin Huey track), notable for containing their theme song to the Cult Classic early 80s sitcom, Square Pegs. The EP also had the famous "Christmas Wrapping," a song Butler had thrown together from various scraps of songs he had lying around, that surprisingly got a lot of radio airplay and became their only charting song in the UK.

Things started going wrong for the band as the touring wore on, as tensions began to build up, and Patty Donahue left after the release of their follow-up album, Bruiseology, produced by influential producer Hugh Padgham. Chris Butler made an effort to get the Waitresses going again in 1983, and got Holly Beth Vincent, formerly of Holly and the Italians, as the new lead singer. Vincent bailed on the band after two weeks, so Donahue briefly agreed to come back, and the band were able to put out the EP Make the Weather before the Waitresses finally went their separate ways by the end of 1984.

The band’s bassist, Tracy Wormworth, would go on to be an in-demand touring musician for such luminaries as Sting, Cyndi Lauper and more, plus a member of the house band on The Rosie O'Donnell Show, and a member of The B-52s since 1992. Chris Butler himself would produce some albums here and there for other artists, like the dB’s and Joan Osborne, before he eventually went solo. Among his accomplishments is recording the world’s longest pop song, “The Devil Glitch,” in 1997, as well as a reformation of Tin Huey in the late 90s. Meanwhile, Patty Donahue moved behind the scenes for MCA and became a talent scout. Unfortunately, her heavy smoking habit caught up to her, and she passed away in New York City after a battle with lung cancer, in December 1996.

A live album, King Biscuit Flower Hour Presents the Waitresses, was released in 1997.

Tropes associated with the Waitresses include: