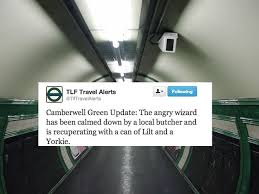 Delays
TLF Travel Alerts is a parody Twitter account for London's public transport system, existing in a bizarre alternate world where buses and trams have Thomas & Friends-like intelligence, and eldrich horrors lurk in subway tubes. And boats. They also have boats.
Advertisement:

All services now too busy reading this wiki, expect delays.