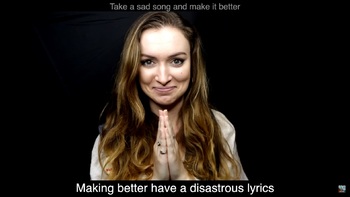 Twisted Translations (originally Google Translate Sings, and then Translator Fails) is a web series created by Malinda Kathleen Reese in which she takes songs by famous artists, runs the lyrics through several languages in Google Translate and back into English until they barely resemble the original text, and then performs the song with the new lyrics. Hilarity Ensues.

The series has grown since it started, and Malinda now often dresses up as the characters she portrays, and sometimes incorporates location shooting in her videos. Many videos also features other YouTubers in singing parts. As of July 15th 2014, viewers can now contribute to the show by submitting their own bad translations to Malinda. Occasionally, they will translate things that aren't songs, such as instructions and poems. In December 2020 the channel was rebranded Twisted Translations and expanded to include collaborator Tom McGovern.

The series can be found here.