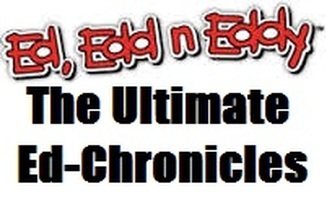 "Join Ed, Double D, Eddy and their loyal friends as they travel to many different lands and face off against the forces of evil. Along the way, they learn the importance of friendship, teamwork and heroism."
—Premise description of the titular first series from the official site
Advertisement:

Ever wonder what would happen if someone took Pooh's Adventures and did it with Ed, Edd n Eddy and many characters from other fandoms and tried to make a shared universe of it? Well, you don't have to. Because it already exists. Ironically, it has nothing to do with the Pooh's Adventures beyond the similar formula.

Created originally on YouTube by Movieman MDG and B-Master Animation before moving to its own website, The Ultimate Ed-Chronicles is Exactly What It Says on the Tin. Basically the three title characters of Ed, Edd n Eddy go on all sorts of adventures in varying movies, ranging from The Black Cauldron, Iron Man and many more that the creator has planned.

in development, featuring characters from The Loud House, Gravity Falls and Final Fantasy called "The Loud Ghostbusters" with the first crossover being Ghostbusters (2016). It now even has a Reddit page

Tropes that apply to The Ultimate Ed-Chronicles: