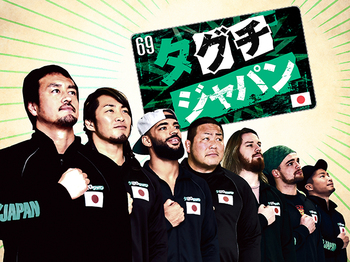 One really nice team...when they can hang onto members, that is.note From left to right: Ryusuke Taguchi, Hiroshi Tanahashi, Ricochet, Manabu Nakanishi, David Finlay, Juice Robinson, KUSHIDA
Taguchi Japan is a Professional Wrestling Power Stable that debuted in 2017 for New Japan Pro-Wrestling as one of their main "Units". And like everything else regarding them...it happened almost entirely by surprise.

The day after the 2017 Wrestle Kingdom, Ryusuke Taguchi teamed with Hiroshi Tanahashi and Manabu Nakanishi to win the NEVER Openweight 6-man Tag Championships, and immediately began to fill out their roster with all number of notable faces at the time: Michael Elgin, Dragon Lee, and Kushida. Since that point, Taguchi Japan has gone through almost more individual roster members than any other unit in NJPW, as their "Open Door" policy allows them to both get major talent as quickly as they lose it, with their general idea being that Taguchi is "coaching" these talents to bring the best out of them and to bring success back to the team.

And like any new team, they didn't start out so hot, as they tended to be the Also-Rans against more successful stars' lengthy title reigns, but finally began to rebound as they picked up two longer-term members; Juice Robinson and David Finlay, and more importantly...their performance at Dominion 6.9 in Osaka-Jo Hall, where Robinson won two matches and set himself up to eventually become IWGP US Champion, and Elgin would become NEVER Openweight Champ. They didn't hang onto them for long, but it solidified the power around their chosen number, and the surprise success their hard-luck and slapdash wrestling style brings.

Taguchi Japan is a stable all about the hard-luck pitfalls and goofy antics of teamwork and sacrifice that a stable can bring, and even if they may not be the most successful, they are among the most entertaining.