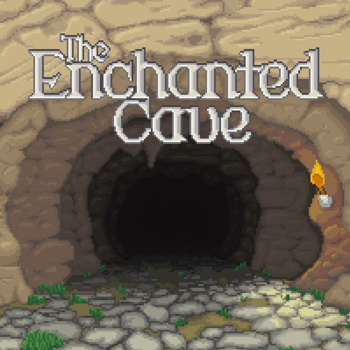 The Enchanted Cave is a 2010 Dungeon Crawling Web Game created by Dustin Auxier and available on Kongregate, Steam and mobile.

A crowdfunded sequel, titled The Enchanted Cave 2, was released in 2015.

Both games follow a simple premise: there is a cave and you explore it, killing monsters and collecting items along the way. The cave of the title has 100 floors in the first game, and 80 in the second (100 in the Steam or mobile versions). You can go down, but never up. You can, however, exit the dungeon by using wings that are found in a random chest. Escaping will keep your gold and stat boosts (your level and skill point distribution are also kept in the second game), but none of the items you found, except for artifacts, which are marked by a different background color.

After exiting the dungeon, you then start again. In the first game, you go on the second lowest shop you have reached. There are shops on floors 9, 19, 29, etc. so, for example, if you have reached a floor between 29 and 38 inclusively, you will return to floor 19. In the second game, you can choose which floor to start at, but you can only start on a floor with a shop you have visited. There are shops every 10 floors.

The Enchanted Cave contains examples of: