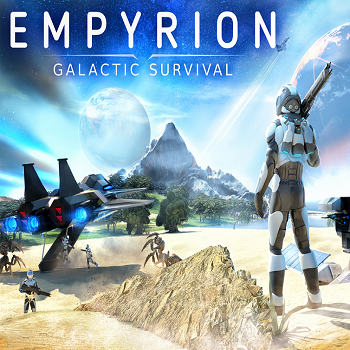 Empyrion: Galactic Survival is a Survival Sandbox exploration game developed by Eleon Game Studios, where the players take on the role of human survivors of their starship's destruction. It was released for PC through Steam Early Access on August 5th, 2015 and it remains there as of the time of writing.
Advertisement:

In the 24th century, humanity's fate on Earth was at risk: population had risen to 18 billion, resources were becoming scarce, global warming had caused a rising of the sea levels and industrial civilization was a century away from total collapse.

But then, in 2402, a team of researchers found the wreck of a starship that had been buried under the Antarctic ice. This spaceship not only contained technology advanced enough to allow humanity to reach the stars, but also a map to what appeared to be inhabitable planets. With nothing to lose, united humanity built a fleet that would allow them to leave Earth and prosper, a fleet led by the MS Titan. However, soon after their first space jump, humanity made First Contact with the Zirax, a predatory species that promptly attacked the human fleet. MS Titan was destroyed along with most of the fleet, while the survivors jumped again, away from the Zirax.

The player is the commander of the MS Titan, who managed to escape the explosion in the nick of time by boarding a escape capsule, but this left him knocked out... until he awakens and sees his capsule falling down on an inhabitable planet. After just barely surviving the crash, and armed with a pistol and a few tools, the player now has to find the way to survive by making the most of the situation: finding supplies, harvesting local food, digging for ores... so you can make yourself a spaceship and fight back against the Zirax that inhabit the solar system you are in.