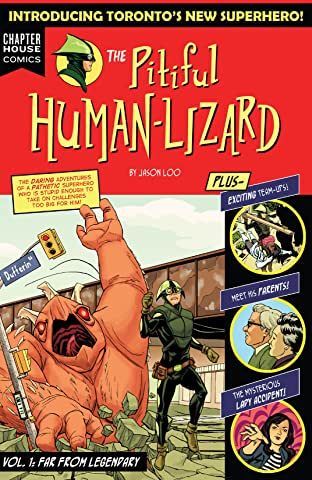 The Pitiful Human-Lizard is a Canadian Comic Book by Jason Loo and Allison O'Toole.

Lucas Barrett is a 30-something guy living in Toronto Ontario, Canada. By day, he's an office clerk who practices Brazillian Jiu-Jitsu and is a Star Wars fan. By night, however, he is the Human-Lizard, a crime fighting vigilante dedicated to cleaning the streets of crime. Problem is, he kind of sucks at it. Doesn't stop him from putting himself out there night after night, though.

One day, however, while at his BJJ class, his sensei informs him that his credit card's been declined for the next session. Not wanting to give up on his crime fighting career, Lucas rents himself out as a test subject to a pharmaceutical company who gives him a new painkiller they've been developing. One pill sends Lucas into a more-than-an-hour-long puking session and makes him lose consciousness for a while. However, after taking another beating, he also discovers that the pill gave him a Healing Factor. With this new power, Lucas continues to try to deal out justice in Toronto.

The Pitiful Human-Lizard contains examples of: