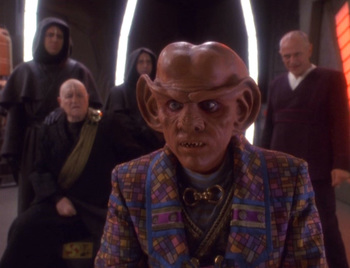 The face you make when unstoppable greed meets an immovable conscience.
Dax is playing Tongo with Quark and getting irritated by his distraction. The morose Ferengi reveals that his finances have all recently been wiped out, and he has only one week to pay off loans or lose his bar. But then his cousin Gaila arrives and offers to cut him in on his arms dealing business, promising Quark that within a year, he'll earn enough to buy his own moon. In spite of his reservations about the arms trade, Quark agrees.
Advertisement:

Quark meets Gaila's partner Hagath and the pair assure him that they won't ask him to bring weapons onto the station. Hagath takes an instant liking to Quark but warns him, "Never cross me." Quark uses his holosuits to give buyers demonstrations with holographic replicas of their wares and proves to be an excellent salesmen. Hagath funnels Quark's earnings directly to his creditors to make sure that he doesn't become compromised by his debts. The group is riding high until Odo storms in on Quark and arrests him for selling weapons without a license. But then Sisko and Kira arrive and announce that Hagath and Gaila have been granted clemency by the Bajoran Provisional Government in thanks for selling them the arms that they used to win their freedom. Odo releases Quark reluctantly, but everyone warns him that he's on precariously thin ice with the law.

Quark is treated as an outcast by Federation citizens on the station, but he's still got his arm deals running. He's given pause when Hagath confronts one of his other business partners, Farrak, for poor performance and fires him on the spot. Gaila confides in Quark that he's thinking of retiring and giving Quark a greater stake in the business, but the deal doesn't sound so inviting after Gaila mentions that Hagath had Farrak killed on his flight from the station.

The trio's next big customer is the Regent of Palamar, who wants to buy a bio-weapon to kill upwards of 28 million people in a strike against his rival, General Nassuc. Horrified, Quark urges the Regent to reconsider such a brutal action, but Hagath coldly brushes Quark's objections aside. Gaila later confronts Quark and tries to convince him to set his conscience aside in the name of profit. Caught between a genocide and a murderous partner, Quark reaches out to Dax for support, but she won't listen to him. He has a nightmare about the station all being ghosts and blaming him for their deaths.

While all this has been going on, O'Brien has been unable to let go of his son Kirayoshi without the boy crying, so he's been forced to take him everywhere. He realizes that a certain section of Ops lulls the baby asleep, but it's only a temporary solution. Ultimately he takes a few days off, and Worf visits. When O'Brien hands the baby over to Worf for a moment, Kirayoshi falls alseep, and O'Brien promptly passes out himself.

Quark tells Hagath that he could not get the weapons that the Regent wanted but has an alternative, so they'll need to meet with the Regent again to discuss it. Afterward, Quark tells Gaila that he's arranged a deal with General Nassuc to double their profits and assures his cousin that all will be well as long as neither side finds out about the other. However, Quark has scheduled both deals for the same cargo bay. When the two sides meet, chaos and shooting erupts. Quark slinks away and sits down as Odo's security rushes to the scene. In the aftermath, the Regent has been killed and the General has sent assassins after Gaila and Hagath. Quark is in the clear, but Sisko saddles him with the bill for the damages to the cargo bay, which he agrees to pay off in installments.

In the end, Quark and Dax have reconciled, and they're now playing Tongo again.

"Odo could be anything!"

With a shapeshifting detective on the station, Odo is very nervous when up to something more illegal than usual, and quickly starts checking the inanimate objects for disguised Changelings.

Example of:
Mistaken for Transformed

"Odo could be anything!"

With a shapeshifting detective on the station, Odo is very nervous when up to something more illegal than usual, and quickly starts checking the inanimate objects for disguised Changelings.