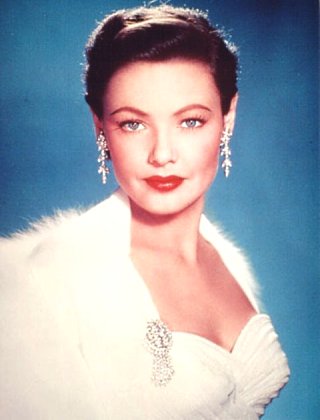 Gene Eliza Tierney (November 19, 1920 — November 6, 1991) was an American actress and major contract star for 20th Century Fox in the 1940s and early '50s. Considered one of the all-time great screen beauties of The Golden Age of Hollywood, Tierney is best remembered as the title character in 1944's Laura (in which she was quite believably cast as a woman so beautiful the detective investigating her murder falls in love with her portrait) and for 1945's Leave Her to Heaven (Fox's highest-grossing movie of the decade, which tells you something about how cinema has changed). Her chilling performance in the latter earned her her only Academy Award nomination, for Best Actress.

She was married to fashion designer Oleg Cassini from 1941 to 1952. He designed most of the outfits she wore in her movies. During a brief separation, she had an affair with John F. Kennedy and might have ended up the First Lady if his Catholic family had not so strongly opposed the idea of him marrying a divorced woman. (In a strange twist, Oleg Cassini would be named Jackie Kennedy's exclusive couturier in 1961.) Howard Hughes was also a lifelong friend. She married Texas oilman W. Howard Lee in 1960 (shortly after his divorce from Hedy Lamarr; some guys have all the luck) and remained with him until his death in 1981.

Her beauty was matched only by the tragedy of her personal life. While pregnant with her first child, Daria Cassini, in 1943, Tierney contracted rubella. Daria was subsequently born premature, deaf, partially blind, and severely intellectually impaired. These problems contributed to (or, perhaps, outright caused) Tierney's own depression and bipolar disorder. About a year after Daria's birth, a woman approached Tierney at a party and said that she had sneaked out of her marine base, under a rubella quarantine at the time, to meet her when she appeared at the Hollywood Canteen, a wartime club that catered to service members where Hollywood stars would appear. Tierney simply stared at the woman, then turned and walked away. She later wrote, "After that, I didn't care whether ever again I was anyone's favorite actress." It is generally accepted (though unconfirmed) that this was the basis for Agatha Christie's The Mirror Crack'd from Side to Side. Christie, however, claims she had no idea about Tierney's personal life when writing the novel and was horrified when she found out. Tierney's health problems led her to largely leave acting after 1955's The Left Hand of God. (She was in such bad shape by then that co-star Humphrey Bogart, who had a mentally ill sister, fed her lines between takes.) She spent the next few years in and out of mental institutions (during which she was subjected to numerous shock treatments, which she later became an outspoken critic of), and appeared only sporadically in a few movies and television shows after that.

No, she's not related to Lawrence Tierney or Maura Tierney.

Films with pages on TV Tropes include: