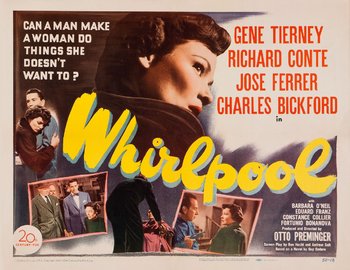 Yes. Yes, he can.
Advertisement:

Whirlpool is a 1950 Film Noir directed by Otto Preminger and starring Gene Tierney.

Ann Sutton (Tierney) is married to a prominent psychoanalyst, Bill (Richard Conte), and her life seems to be perfect, except for the fact that she’s secretly a kleptomaniac.

She’s caught shoplifting in a fancy department store but is saved by David Korvo (José Ferrer). Korvo is a "doctor" — read: quack — who claims the ability to cure his patients through astrology and hypnosis, and he posits that he can rid Ann of her pesky insomnia and shoplifting habits. However, Korvo is a man of ill repute who gutted Teresa Randolph (Barbara O’Neil) out of her money. Agreeing to his methods, Ann is hypnotized by Korvo but is soon found at the scene of Teresa’s murder without any memory of the events.