Film / Night and the City 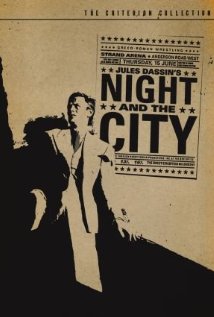 A 1950 Film Noir directed by Jules Dassin, Night and the City is a bleak tale of ambition, morality, and sacrifice.

The film's protagonist is Harry Fabien (Richard Widmark), whose ambition is to control all of professional wrestling in London. His girlfriend, Mary Bristol (Gene Tierney) is not supportive of his plans, but sticks up for him anyway. Harry works as a con man, tricking men into visiting the Silver Fox Club, owned by Phillip Nosseross (Francis L. Sullivan) but really run by his wife, Helen (Googie Withers). Harry strikes a deal with Helen: she gives him £200 to obtain her restaurant license, so that she no longer has to serve her husband, and agrees help fund his wrestling plans.

One night, Harry meets an old retired Greek wrestler named Gregorius (Stanislaus Zbyszko), and becomes his buisiness partner. Gregorious' son, Kristo (Herbert Lom) is aware of Harry's unscrupulous nature and warns his father, who trusts Harry. This disagreement causes a huge rift in the relationship. Because of his own ambition, Harry not only becomes more and more ruthless, but also makes several enemies. Namely a wrestler named The Strangler (Mike Mazurki).