Literature / Insert Knob A in Hole B 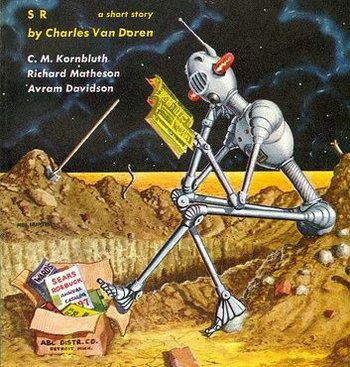 During the discussion, Dr Asimov claimed that he could write under any circumstances and his fellow panelists challenged him to prove his claim by writing a new Short Story before the end of the panel. He accepted this invitation with excitement (having primed himself to expect the challenge while backstage), and began writing vigorously. With his Pride at stake, Dr Asimov continued to participate in the panel while creating the story. Before 8:30pm, he read the story aloud for the Studio Audience.

"Insert Knob A in Hole B" takes place in a remote outpost where his fellow panelists have been having trouble assembling the various equipment they've been provided with. At best, their equipment is somewhat functional, and some of the life-support systems occasionally stop working. Like the panelists they’re based on, Hansen and Woodbury complained about poorly written technical documents. They sent formal (and emphatic) requests for solutions. To help them, a robot was designed to assemble any possible machine that has ever been built, no building instructions needed. Now that it's arrived, Hansen and Woodberry discuss what they'll instruct the robot to reassemble first. The crate is opened to reveal... a blurry sheet of badly written directions and five hundred pieces to assemble.

The following tropes may need some assembly: