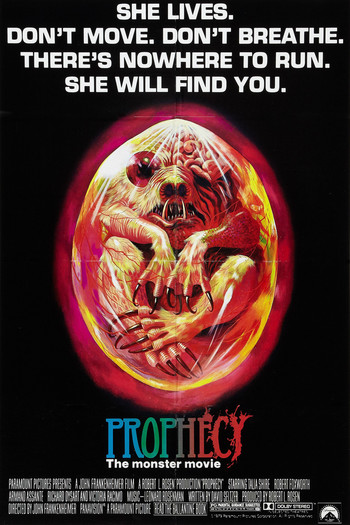 "It is not an offspring of witchcraft or Satan. It was created by man. It will grow to be 15 feet tall. It will have huge eyes, webbed hands, hooked claws. It will walk upright. And it will mindlessly, mercilessly, kill every living thing it meets."
Advertisement:

Prophecy is an ecological horror film from the year 1979. It was directed by John Frankenheimer and it stars Robert Foxworth, Talia Shire, Armand Assante, and Richard Dysart.

Dr. Robert Verne (Foxworth) is sent by the EPA to Maine, to investigate a dispute between Native Americans led by John Hawks (Assante) and a local paper mill. Taking his wife Maggie (Shire) with him, he discovers that the area is heavily contaminated by methylmercury

and encounters the mutations it has caused.

If you were looking for the Christopher Walken movie, go see The Prophecy.