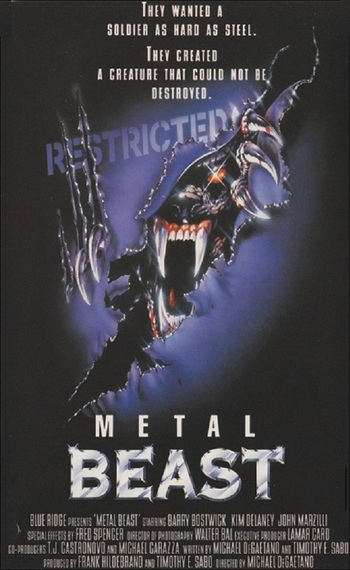 Project: Metalbeast (also titled Project Metalbeast: DNA Overload or just Metalbeast) is a 1995 horror/science fiction film, directed by Alessandro De Gaetano and starring Barry Bostwick, Kane Hodder, Kim Delaney, and Musetta Vander, with a screenplay by Roger Steinmann. The basic plot is about a cold-war era military project using samples taken from a werewolf resulted in the soldier who injected himself with the samples going berserk and being put on ice after being shot with silver bullets. Twenty years later another project involving metallic artificial skin for medical applications is given the a John Doe "cadaver" to test the skin on. When the doctors find the bullets lodged in his chest they remove them and unknowingly revive the corpse. Healing its wounds, the werewolf's body adapts to the artificial skin and gives it a metallic outer coating.

So basically it's a werewolf movie with an upgraded lycanthrope who's Immune to Bullets, even the silver kind. It's typical B-movie fare, though not that bad.