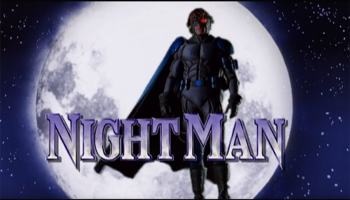 "I will not place my life in the hands of a ... saxophone player!"
Advertisement:

Night Man the television show is an adaptation of the Malibu Comics' Ultraverse character of the same name. A Glen Larson production, the show was developed for syndication and ran from 1997 to 1999.

The original premise is that Johnny Domino, San Francisco's hottest young jazz musician, is struck by lightning and develops the power to hear the frequency of evil, like a radio. He also cannot sleep anymore. This somehow leads him to become a Batman-like hero, but with homemade gadgets.

The TV version went on a strange path that ends up with him in one-off secret stolen-from-the-government Power Armor that grants him Flying Brick abilities, including an invisibility cape, flight, invulnerability to bullets, and the capacity to project a hologram of himself (which in a few episodes performs for him in his club while he's busy elsewhere). This leads Domino (and his friend Raleigh) on a quest to rid San Francisco of crime. Somehow, the definition of crime frequently fluctuates between mundane criminals like bank robbers and drug dealers and vampires and extradimensional beasts.

The show is infamous for moving its production entirely to Canada for the second season, replacing everyone but the main lead with Canadian actors and then carrying on like nothing had happened.