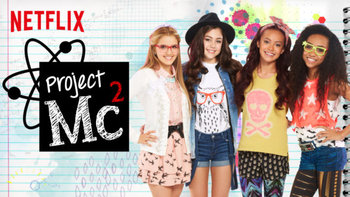 "Smart is the new cool."
Advertisement:

Project Mc2 is a Netflix original childrens' series released in 2015.

When a new girl, McKeyla McAllister, starts at their school and behaves oddly, Bryden and Camryn, with the help of classmate Adrienne, follow her to her house and discover that she's a young spy working for an all-female spy organization, NOV8. As McKeyla is on a mission to protect a prince about to go on a trip to space from an unknown threat, her boss, the Quail, recruits Bryden, Camryn and Adrienne as spy cadets to work with McKeyla.