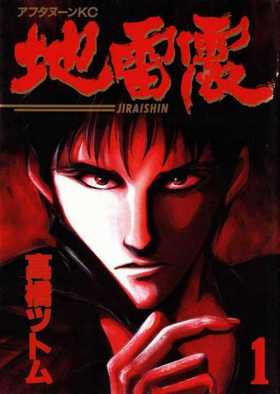 Iida stares down right at your soul.

Jiraishin is an ultra dark detective manga by Tsutomu Takahashi. The title literally means "Landmine Quake". The manga ran on Kodansha's Monthly Afternoon manga anthology from 1992 to 1999. A sequel series by the same author, Jiraishin Diablo, begun serialization in 2008 and ended in 2011 with 3 volumes. There was also a short-lived English adaptation that was published during the late 90's by Mixx Zine (the predecessor of Tokyopop) under the title of Ice Blade. 19 Volumes were published in Japan with 10 Bunko/Aizobans published subsequently. It has been published in French, German, Italian, Korean and Mandarin Chinese. Jiraishin won the General Category Award under the 23rd Kodansha Manga Awards in 1999

Jiraishin follows a case-of-the-week format (it has no ongoing storyline and only a few recurring characters), where the culprits are usually extraordinarily horrible criminal. Kyoya Ida is a detective and a really, really sinister guy. The world is not a happy place, but he deals with it...and, by "deals with it", he ensures that justice is served no matter how morally wrong he appears to be. In Jiraishin Diablo, Ida has left the force while suffering from Keratoconus before he met with a police detective and a grown up Aya Koike in investigating what really happening in Amakura Island after most of its inhabitants were killed by an unknown disease. As the three work to investigate the mysterious deaths, they learn that that the Japanese government has covered up the deaths due to the possible use of a WMD against the island's inhabitants.