There are of course numerous unmarked spoilers (especially for character development) in here, so you should probably only read this after getting caught up on the comic. 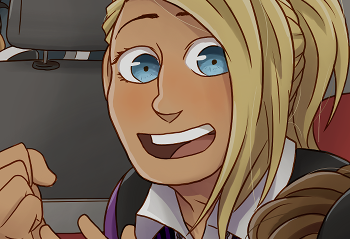 A tall, athletic, 16 year-old girl with bleached-blonde hair (naturally brunette) and big blue eyes. Having been forced to give up her earlier ambition of becoming a track star, because Hearthbrook High won't let her play on the girls' team, she has instead become obsessed with uncovering supernatural mysteries. She seems to have some strange connection with whatever force is behind the monstrous creatures who have begun appearing in town. 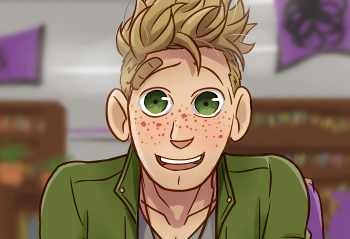 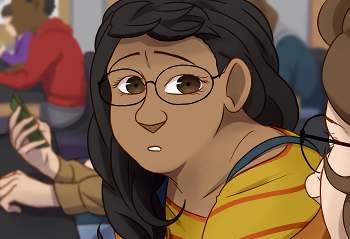 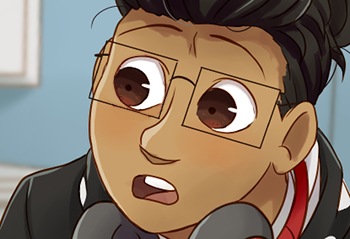 Short and slight, with untidy black hair and brown eyes. Wears square-rimmed glasses. A bit clumsy, Gabe is intelligent but socially-awkward, and inclined to shallow crushes. He is obsessed by anime and manga, to the point that his parents are worried he won't ever find a real girlfriend. 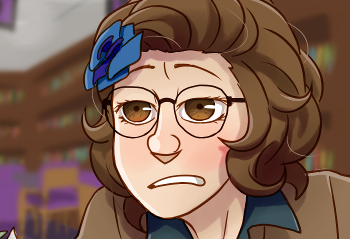 Short, slight but surprisingly strong, Chelle is a brown-eyed brunette who wears round black-rimmed glasses on her pretty and rather delicate face. She tends to dress in rather classy blouses, skirts and tights. She almost always wears a blue flower-shaped ribbon in her hair, toward the right side. She is highly intelligent, logical-minded, sarcastic and a bit arrogant. She is verbally skilled, and her ambition is to become a novelist. 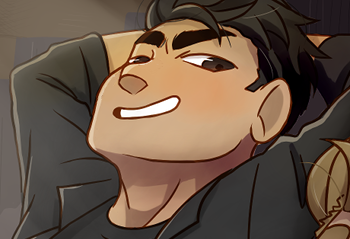 Family of the Journalism Club

Cail's father. A math teacher at the high school his daughter attends.

Emma's mother, Devin and Kacey's step-mother, and wife of Mr. Xue. It is unclear how long after her late first husband passed, that she re-married. She is currently being treated at St. Howard Hospital for a possibly-terminal illness. She is currently shaven-headed and physically wasted from her disease.

Gabe's father. Recently transferred to Hearthbrook and works as Officer Fitzgerald's partner. The Journalism Club is unaware of Gabe's association with law enforcement, but it does not seem to get in the way of Gabe's involvement despite the often questionable legality of the club's work.

Devin's older sister. She was a friend of the Jo Jo Jo's and also played on the girl's soccer team. She graduated high school the year before the comic started.

Devin and Kacey's father, Emma's step-father, and husband of Mrs. Flores. Captain of a commercial air-line, and because of this he is rarely home. Devin and Kacey's biological mother has not been mentioned much, however based on a family photo she was still present in their lives when Devin was a young child. 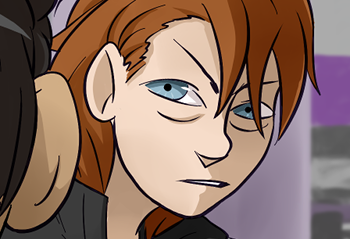 Unresolved Sexual Tension: With Aaron. Yes, she turned him down — but far from decisively.

A thin boy with pale and freckled skin, a mop of red hair and green eyes behind round rimless glasses. He's a drummer.

A tall (possibly albino) girl with very pale skin and nearly white hair. Vice President of the Band Club. She plays the flute (possibly a fife, it's hard to tell).

A big brownish guy with untidy black hair and brown eyes over which he wears square rimless glasses; he is very hairy, and a bit sloppy in appearance. He plays the trumpet.

A tall, sharp-featured black kid who wears his grayish-brown kinky hair in short dreadlocks, and is encountered dressed in a rather concealing gray hoodie with a black multi-pocketed vest over that.

The younger sister of Paige Langworthy, who is cute rather than stunningly beautiful. She has pale skin, red hair and blue eyes.

The fraternal twin brother of Whitney Perkovitch. They look very similar, and were best friends, before Wesley's Monstrous Transformation and resultant disappearance.

Average-looking boy who has dark-brown hair with a blond streak in the front. He is in love with Sabrina, and helps ground her, though this love may be unrequited.

Tall, attractive brown-eyed girl with a long brown-red ombre braid. She is friendly with Luke, and though she seems to dominate their relationship, clearly values his sane advice. 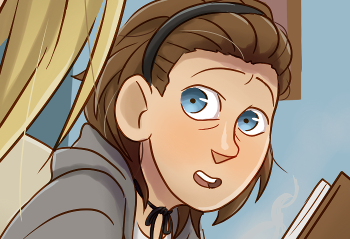 Computer-competent students. They are watching the Journalism Club, especially Gabe, for unknown reasons.

She's a slim freckled redhead, and seems to be the leader of the Hackers.

A minor jock and reluctant acquaintance of Eric Sadler's. He has brown skin with wavy dark-brown hair and brown eyes.

A roving band of drug dealers. While they primarily deal in marijuana, they also sell other medications.

White, male, with dark brown hair. Also refereed to as "The Boss" by the Jo Jo Jo's. He is the only one of the JoJoJos who does not get high at school. 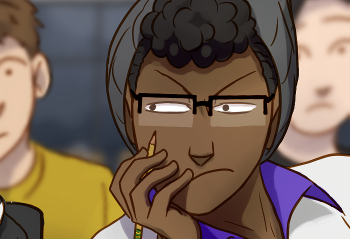 Often dresses business casual and always wears his signature watch. Aside from Aaron, Eric is one of Hearthbrook's only traditional bullies. Falsely believes that the alliance between the Rich Kids and the Jocks, bolstered by Paige and Leo's relationship, means that the jocks are obligated to hang out with him. Paige's ex-boyfriend. Currently dating Vallory.

Paige is currently the queen bee of Hearthbrook High and her relationship with Leo Fitzgerald has brought the Jocks and Rich kids together. She was childhood friends with her neighbor Chelle, but they drifted apart sometime before high school. She is often times hard to read, as she never says anything mean but because of her status she often leaves people starstruck or intimidated.

A swarthy girl with brown eyes and long dark-brown hair.

President of the Student Council. Short, swarthy, slightly-plump Southeast-Asian looking girl with black hair done up in a wide bun at the back. She is intelligent and strong-willed, maybe ruthless. She also runs the Chess Club.

Vice-President of the Student Council. A tall, broad-shouldered, girl with red hair, freckles and purple-tinted glasses.

Treasurer of the Student Council. A tall, dark Indian girl who dresses rather professionally, though in intense rather than subdued colors.

The US History teacher. An old man, and a bit absent-minded.

The school counselor. A short, pudgy woman with blonde hair and brown eyes. Extremely nice and caring. It is mentioned that her family includes at least a mother, a sister and some female cousins.

The teacher in charge of mentoring both the AV and Journalism Clubs.

Hearthbrook's Police Commissioner in 1956. Probably dead by now: if he's still alive he would be in his eighties to hundreds as of 2015. He may come from the same family as Leo Fitzgerald.

Leo's mother. A police officer who works alongside Officer Hernandez. Her relationship to Eugene Fitzgerald is unclear (but he is most likely her father or father-in-law).

Owner of the port.

Father of Wesley and Whitney Perkovitch, works at the port. Brown hair, moustache, blue eyes. Appears cheerful and very much in love with his wife in his photo.

Mother of Wesley and Whitney Perkovitch, works at the port. Lighter brown hair with bleached ends and blue eyes. Appears cheerful and very much in love with her husband in the photo.

Receptionist at the Langworthy Port.

The man believed to be The Crooked Saint, the serial killer who, in the mid-1950's, murdered 44 women. He was a worker at the Langworthy Port. In 1986, DNA tests of old samples pointed to him as the culprit. Leroy was convicted of the crime, and apparently killed himself a week later.

Josh's favorite chicken. Recently slaughtered by Josh's mother, probably to punish him for hanging out late with the Journalism Club.

Allegedly the De Witts' prize milk cow, though she may be the product of Josh's imagination.

A billy goat belonging to the De Witts, whom Josh claims is Lil' Bessie's goat BFF.

The first victim of The Crooked Saint. Buried in Chickadee Grove. The JC comment on her tombstone in Chapter One.

The man convicted of being The Crooked Saint.

Mysterious People, Creatures and Other Phenomena

A serial killer who terrorized Hearthbrook in the 1950's.

A cult who may be leaving mysterious animal-skull and candle altars at various suspicious locations. They seem to be connected with the Creatures, but the exact nature of this connection is not yet known.

The Perkovitch family's garden gnomes, toward which Devin develops a strange sexual obsession.

Animal-skull and candle altars. The Cult (?) leaves these at various locations.

A toaster with which Devin enjoyed (?) an encounter from whose aftermath he required rescue.

A roll of toilet paper Devin brought to TP houses but Chelle claimed as her own adoptive son.