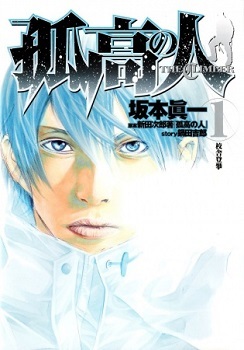 Kokou no Hito (japanese for "Lonely Person", also known as The Climber) is a seinen sports manga serialized in Young Jump, written by Nabeda Yoshiro and drawn by Shinichi Sakamoto, based on the novel of the same name by Jiro Nita, a chronicle of the adventures of real-life solo mountain climber Katou Buntaro.

The protagonist, whose name was changed to Mori Buntarou, is a highly introverted young man who shuns contact with pretty much everyone. Upon transferring to a new high school, a classmate's dare instills in him a love of climbing. The story chronicles Buntarou's life as he joins the school's mountain climbing club and grows up to pursue climbing professionally. Though ostensibly a sports manga, the series is similar to fellow seinen sports series Ping Pong in that it's mainly a character piece and Coming of Age story that uses its sport of choice as a metaphor to discuss issues such as isolation, fear of intimacy, depression, and the way which one should lead life. For this reason it is also frequently compared to Takehiko Inoue's Vagabond, due to the similarities in themes and the main characters.

Though initially a collaboration, Nabeda Yoshiro left around the end of the third volume, leaving Shinichi Sakamoto in charge of both writing and art duties.