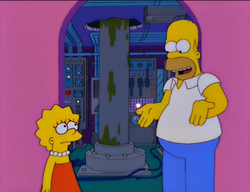 Homer is forced to convert Lisa's room into a cellular phone tower to pay off damages done to the Bill of Rights at the local Smithsonian, and she hates him as a result. They try to reconcile with each other by trying sensory deprivation tanks. Meanwhile, Marge gets addicted to eavesdropping on cell phone calls.