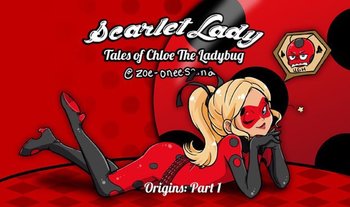 Scarlet Lady is a Miraculous Ladybug Role Swap AU fan comic written and drawn by zoe-oneesama on Tumblr. The first part can be found here

, and the index for the comic parts (starting from Season 1) here

In another universe, Master Fu decided to put the Ladybug Miraculous in Marinette's purse rather than her room. Chloé, still mad at Marinette for talking back to her, decides to rifle through her purse for something she can steal to take revenge. She ends up finding the fancy box the Miraculous is in and takes it, concluding that it's a family heirloom of some sort.

Naturally, this backfires: not only did Marinette not know about the box's existence, but now Chloé finds herself saddled with an annoying fairy who's trying to get her to become an actual hero. Hilarity Ensues.