Literature / The Twenty One Balloons 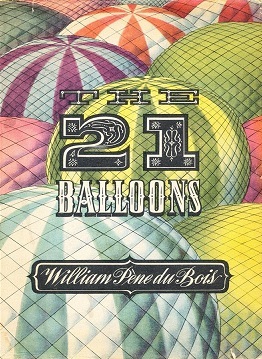 The Twenty-One Balloons (sometimes stylized as The 21 Balloons) is a 1947 children's comedy-adventure novel by William Pene Du Bois.
Advertisement:

Set in 1883, it concerns a schoolteacher/adventurer, William Waterman Sherman, who decides to get away from it all by building a hot-air balloon capable of supporting a small house and setting off on a leisurely round-the-world vacation. Less than a week into his journey, the balloon is forced to crash-land on the island of Krakatoa, where Sherman discovers that a group of eccentric billionaires have created their own tiny society based around gourmet cuisine and the shared wealth of a vast diamond mine hidden at the base of the volcano. Sherman becomes a permanent guest of the island, sharing both their secret and a portion of the diamond mines. Unfortunately, he has arrived barely a week before Krakatoa famously blows its top.

If the plot sounds familiar, it's because F. Scott Fitzgerald published "The Diamond as Big as the Ritz," which is essentially a much Darker and Edgier version of the same story, in 1922. Du Bois was informed of the similarity shortly before publication and swore up and down that it was sheer coincidence (even though he found it amusing that both he and Fitzgerald had the same dream of using their infinite wealth to be slid directly from bed into a hot bath). So far as anyone can tell, the resemblance really is just coincidence, and the lighthearted tone of The Twenty-One Balloons, as well as its target audience, is far removed from Fitzgerald's black-comedy adult parable about greed.

The Twenty-One Balloons contains examples of