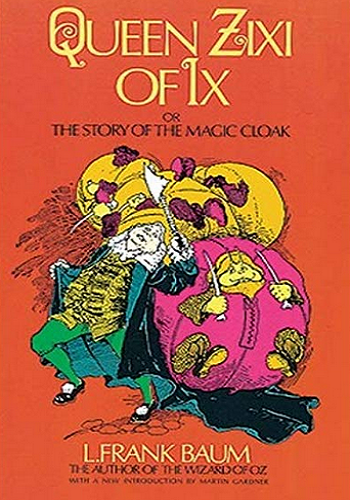 Queen Zixi of Ix, or the Story of the Magic Cloak

is a book written by L. Frank Baum in 1904. While the book itself doesn't take place in or mention Oz, various characters and references to Ix show up in later books of the series.
Advertisement:

One night, Queen Lulea of the fairies decides to have some fun with the mortals by creating a magic cloak that, when worn, will grant its wearer any wish, but only one wish. In addition, the cloak will not grant wishes if it is stolen from its owner. One of the fairies is volunteered to give the cloak to the first unhappy person met in the real world.

That person is a girl named Margaret, called Fluff by her brother Timothy (who is called Bud), who have lost their parents and are now abused by their Aunt Rivette. While moving to Nole, capital city of Noland, Bud is unexpectedly crowned king, due to a rule proclaiming the 47th person to enter the city gates to be crowned king in the event of a Succession Crisis.

Once Bud and Fluff enter the palace, the magic cloak trades hands several times, granting wishes to the people of the court who aren't aware of its power. News of the magic cloak reaches Queen Zixi of Ix, a 600-year-old witch-queen who appears as a 16-year-old to all but a mirror, and wishes nothing more than to be able to see her beautiful reflection. Thus, she prepares to take the cloak by any means necessary.

Though overshadowed by the immense popularity of The Wonderful Wizard of Oz, it is widely considered, even by L. Frank Baum himself, to be among the best books ever written by him.