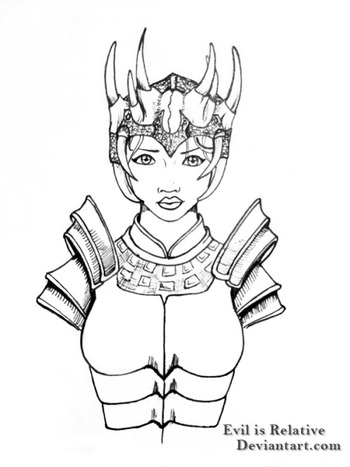 by Evil is Relative

is a series of The Elder Scrolls V: Skyrim fanfics by ms_katonic

, following the adventures of Elisif, Skyrim's High Queen presumptive, as circumstances force her to transform from a mourning figurehead to the legendary Dragonborn and all-around badass.

) covers the main plot of Skyrim and the Skyrim Civil War. Its sequel, Fearless Vampire Hunters

), follows the Dawnguard DLC, starring Cicero and Eola. The third, longest, and currently ongoing fic, Age of the Dragon

) crosses the series over with Dragon Age: Inquisition as a consequence of Elisif's attempt to restore her husband's health by petitioning the gods.

Elisif the Dragon-Queen contains examples of: