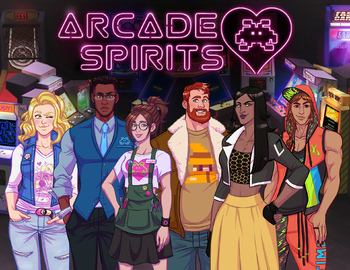 Welcome to the Funplex!
Advertisement:

The year is 20XX, 20 Minutes into the Future, and arcades are mainstream. The Great Video Game Crash of 1983 never happened, and as a result, arcades never declined in popularity, remaining a permanent part of popular culture. That doesn't make running one any easier than running any other small business, though.

Enter the protagonist, a jaded twenty-something searching for work. When their best friend Juniper suggests they try a new semi-virtual reality app named IRIS to help them get a job, they are offered a chance to work at an arcade. Though skeptical at first, they decide to revisit that bastion of their fun-filled childhood and apply for the job as a floor manager. There, they meet all manner of quirky and attractive coworkers, plus a few serious regulars, each of whom is in love with arcades in one way or another, despite all being very different people. Through their work, the protagonist will re-learn what it means to find happiness in the world, and make a bunch of great friends along the way - and maybe even love.

Arcade Spirits is a Ren'Py-based Visual Novel by Stefan Gagne, creator of Sailor Nothing, and Aenne Schumann. The full version of the game was released on February 12, 2019. The website can be found here.

Tropes in multiple games
Tropes in the first game
Ashley: A waketervenspiracy!
Player Character: Are you a bad enough dude to rescue the president?
Iris: You just don't appreciate the sublime majesty of combining two of the greatest bread-related snack products into one hybrid masterpiece.
Tropes in The New Challengers
Advertisement: