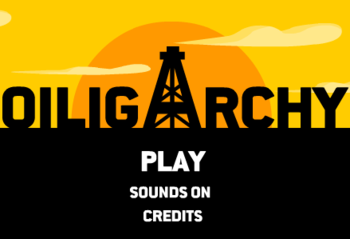 Oiligarchy is a web game made by Molleindustria. You can play it here.

The game has you playing as the CEO of an oil company immediately after World War II. Your have one goal: maximize your profits by selling oil to America, or else your board of directors will have you fired. To accomplish this goal, you have to keep America hooked on oil to fuel its economy, which means greasing the palms of politicians to make them pass bills friendly to your business and unfriendly to the environmental movement. Eventually, you can get America to invade other countries for their oil, have anti-terror legislation passed to silence environmentalists and social justice advocates, bribe Third World dictatorships to drive out the tribesmen who stand in your way, and use other nefarious means to get as much oil as humanly possible.

But eventually, that oil is going to run out...

As you may have guessed by now, this game takes a very particular view of the oil industry. At the same time, however, what other game affords you the opportunity to play as a card carrying Captain Planet villain, Laughing Mad at your computer while poisoning lakes and killing caribou?