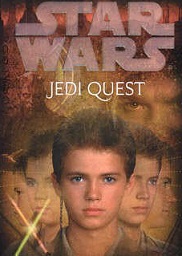 A ten book series by Jude Watson, Jedi Quest takes place in the Star Wars Legends continuity, and is a Spiritual Successor of sorts to Watson's previous Jedi Apprentice series. The books deal with the developing relationship between Obi-Wan Kenobi and Anakin Skywalker during the time between The Phantom Menace and Attack of the Clones, and details many of their missions. Like its predecessor it was aimed at a largely tween audience.