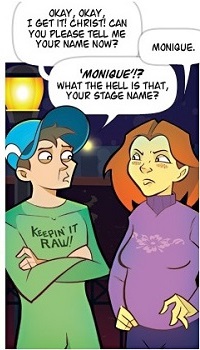 The star crossing of a sexist fratboy and a vengeful feminist; truly a match made in heaven
"Join Coach Brew and Trip as they wage an epic battle against societal stupidity!"
— Shredded Moose's slogan and mission statement
Advertisement:

Shredded Moose is a discontinued gaming webcomic written by Chris Hall and illustrated by famed children's book illustrator Brian C. Krümm (who later masterminded Eartha the Sea Turtle with Dan Bodenstein) that circulated on the internet from 2007 to 2009. It went through a large number of revisions and changes in ideology during its lifespan but its premise started out simple and easy to follow. It mostly concerned the often raunchy, often NSFW wacky misadventures of Two Gamers on a Couch, hot-tempered womanizing fratboy, Brew and his foil, a meek, kind-hearted, Straight Man in a green hoodie, Trip with jabs and mockery at the then-current 2007 video game/pop culture.

The central theme of Shredded Moose centered around providing examples of reoccuring trends in society that caused people to behave stupidly or impeded on the 1st amendment, which were demonstrated in the comic and in the often unrelated, accompanying blogs by Chris Hall who wrote them as if they were written by his Author Avatar, Brew.

Joining our heroes were second Straight Man uhh... squirrel, an anthropomorphic talking animal, Muff, and his curious dating partner, a slim human woman named Lisa with a gung-ho attitude. Last but not least was Monique, a young, redheaded mother clad in a trademark purple sweater who’s greatly concerned about Brew’s treatment of women. Originally intended as a Straw Feminist, shortly after her debut, Monique blossoms into the female lead.

In mid 2008, Hall and Krümm began to shift Shredded Moose into a series of story arcs that tackled more serious forms of societal stupidity. Backstories for Brew and Monique were developed; providing knowledge on their upbringings and how it shaped their personalities. Trip gained an unrequited crush on Nicole, a young brunette woman who attends the same classes as him.

From mid 2008 to January 2009, Shredded Moose, eschewed its crude gag formula and tackled a storyline in the Psychological Thriller genre, focusing solely on Brew and Monique and rife with left turns and PlotTwists.

And once that storyline came to a close in January 2009, Shredded Moose went through a Heel–Face Turn and became a Slice of Life comic about Trip's positive and negative experiences in high school with a very dramatic Tone Shift, becoming very mild and light-hearted with no senseless killing, crude humor or psychological trauma.

A final storyline was introduced in July 2009 focusing on Brew's reflection on his treatment of women and Monique's influence on his life. After remembering her life-risking act of saving him and her love for her daughter, he finally sees the human side to women and resolves to treat them better.