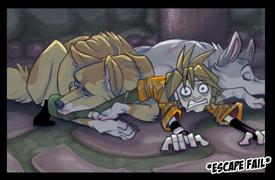 Ladies and gentlemen, our hero.
Chase Sigismund is falling apart. Chronic insomnia will do that to you. But is his life spiraling out of control because of a simple sleep disorder? Or did reality just become much worse than his nightmares?
What if nothing were coincidence? What if every happy or horrible event that took place in your life was put there on purpose? What if it were all an experiment; a war game that has taken place on a hidden plane since the dawn of humanity? What if you woke to find yourself in the midst of it? What if everything you thought was true was, in fact, a lie?

A fantasy webcomic by Sarah Davis following long-suffering Butt-Monkey Chase, a paranoid teenager who discovers that his nightmares have root in reality. An adventure/drama, with elements of comedy.

The comics main webssite is here

and ut can also be found here

at the artist's DA gallery, along with supporting material.

As far as we can tell the original run of the comic began sometime in 2006. The comic went on it's first hiatus on July 19th 2009. However, starting January 9, 2011, it began updating again. The early parts of the strip were revamped as well as having material added. Essentially the entire comic got a Continuity Reboot, seeing as none of the later pages from the earlier rendition are available for so much as as a comparison. However while the comic updated regularly between January and August 2011 updates stopped (apart from a couple of sketches) until May 2013. Updates were then pretty solid until February 2014 when they died off again, with only two updates throughout the rest of the year. Nothing was updated until January 2016, then updates again stopped after February 2016. Nothing was heard from the author until June 2018 where they penned a lengthy Tumblr post

explaining the realities of life (not least of which the vast differences between the author's eighteen year old self who started the comic and their current mid-thirties self) and inviting feedback on whether they should reboot the comic again or "put it to bed" as part of the artists early history and start new projects.