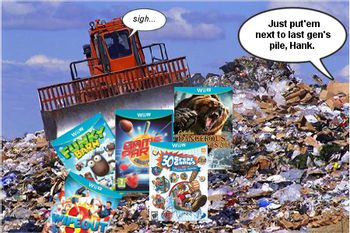 Image taken from The Punk Effect.
"Shovelware preys on consumers who are attracted to the low price and general cover art. You mainly see some parents buy their kids this stuff because hey, it's cheap, it looks like kids would enjoy this, and they really don't know what a high quality game is compared to shovelware. Most parents don't know the difference between Gummy Bears Minigolf and Metroid Prime 3."
— Scott The Woz, "The Shovelware Variety Hour"
Advertisement:

Shovelware, also known as "crapware" or "trashware", is essentially lowest-common-denominator software. Perhaps the software was created to take advantage of a fad. Perhaps it was made to cash in on a bit of marketing share of something eminently useful. Or perhaps it was an actually good or clever idea that either suffered severe budget cuts and time constraints, or was simply made as an afterthought in the developers' spare time. The term is also used (especially in the past) for game bundles of very low-quality games where quantity is regarded more important than quality (a common form of this was game bundle CDs shipped with game magazines). Regardless of how it was made, almost all examples of shovelware are made with very little thought or care, as if they just scooped up a load of software from a trash heap, dumped it on a table and slapped on a price tag, hence the name.

The term ultimately originates in the CD-ROM boom of the early 1990s, when distributors started packing a bunch of older games onto the then unheard-of 640 megabytes of a single CD-ROM. The word "shovelware" was originally used of CD-ROM compilations of mediocre-at-best commercial games that had previously been released years before. It later was associated with CD-ROM collections of shareware that packed hundreds or thousands of games or art assets onto them. The sheer scale of these CDs meant that any given distributor quickly ran out of "good" games/art assets, and had to go hunting across BBSes and the then early Internet for new assets to fill them up, thereby lowering the reputation for the word even further.

A more modern interpretation of this trope is the "Asset Flip"; the name being a portmanteau of "game assets" and "flipping-a-[thing you own]-to-make-money-quickly", and was coined by James Stephanie Sterling of Jimquisition fame. These are "games" made using a build-it-yourself game engine and use unaltered stock or store-bought assets like character models, sounds, and maps within them. They are an increasingly common form of shovelware on digital storefronts, most notably on Steam via the now-defunct "Steam Greenlight" program, and the slightly less broken (but still alive) "Steam Direct" and "Steam Early Access" programs. While Valve has a hard time of taking them down on their own store due to their "hands off" approach to their marketplace, it has also proliferated onto the likes of the PS-store and the Switch's eshop.

The issue with asset flips is not the use of pre-made assets by themselves (which are invaluable to indie and AAA game development), the issue lies in the whole core experience of the game being made up solely of assets in one art style or theme clashing with another simply to sell a game for a quick buck. Something to note is that just because a game uses pre-made assets, does not make it an "asset flip" or shovelware.

The Unity engine, and its associated asset store, were among the most used for these sorts of games, to the point where the engine itself now has a serious image problem, as the sheer amount of shovelware displaying the Unity logo put a lot of players off from the game, even if the game in question was actually good. Despite this stigma, Unity is a seriously fantastic engine used to make all manner of good games like Hearthstone, Cities: Skylines, Animal Crossing: Pocket Camp and Kerbal Space Program, just to name a few titles. However, its greatest asset is also its greatest curse; the engines' ease of use was directly proportional to how many people abused it to make asset flips, and so suffered greater than other game engines. Speaking of which, Cryengine and Unreal Engine also have similar asset stores and are also susceptible to the same asset flip issues as Unity, but these game engines were established by games made in those engines from years past (Crysis for the former, Unreal Tournament for the latter), and so have less of a problem when it comes to their image.

Many movie tie-in games are considered shovelware, though there are exceptions.

Shovelware on a grand scale was a major factor in The Great Video Game Crash of 1983.