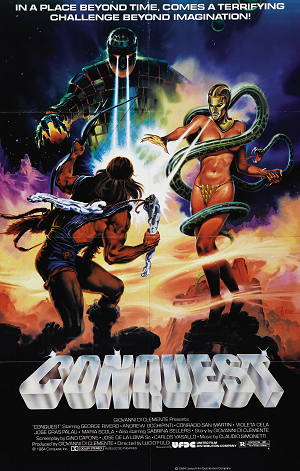 Conquest is a Spanish-Italian-Mexican Surreal Horror and Dark Heroic Fantasy Exploitation Film by Lucio Fulci with music by ex-Goblin member Claudio Simonetti. If that sounds absolutely insane to you, it’s because it is.

As part of his Rite of Passage the young Illias is sent from his relatively idyllic and civilized homeland to a desolate barbarian marshland. On this quest he is armed only with his Ancestral Weapon, a bow said to be able to shoot arrows of pure sunlight. Illias is eventually joined by the misanthropic warrior Mace, who only has eyes for Illias’ bow. Meanwhile Ocron, the cruel sorceress ruling the lands, has a vision of a faceless man killing her with the very same bow. This sets the gears in motion that will lead to their unavoidable confrontation.