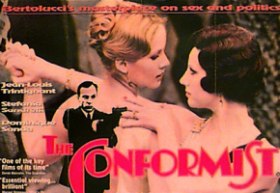 That's how you tango
Advertisement:

Or in the original Italian, Il Conformista. A 1951 political thriller written by Alberto Moravia, and the 1970 film of the same name.

Set during the era of Benito Mussolini's dictatorship in Italy before World War II, Marcello Clerici has spent his life doing everything he can to conform. He marries a pretty, rich girl named Giulia. Unknown to his new wife, Marcello is working for the fascist Secret Police and is sent on an assignment to kill an outspoken, anti-fascist intellectual now living in France. Marcello is conflicted when he finds out the target he is being sent to kill is his friend and former college professor, Professor Quadri. Marcello travels with Giulia to Paris for their honeymoon (and to take care of that pesky assassination) but there is another snag in his plan. Marcello falls in love with his target's beautiful wife, Lina (named Anna in the film). Lina knows Marcello is with the secret police but things are further complicated when she develops feelings for his wife.

The novel was directly inspired by Moravia's experience of Fascist Italy. His own cousins were murdered by the secret police in 1937 for their part in the founding of an anti-fascist organisation, and he himself was blacklisted both on this account and for his Jewish ancestry.

The film is notable for its beautiful cinematography, and forms the second half of the "Kinky Fascist" art-house double feature with Visconti's The Damned (1969). Directed by Bernardo Bertolucci with cinematography by Vittorio Storaro.