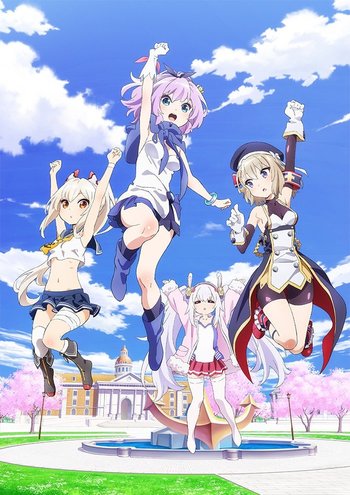 The naval port of Azur Lane is as lively as it can get—just some of the people present include the upbeat and cheerful Javelin, the laid-back and easygoing Laffey, the quiet and calm Ayanami, and the earnest and determined Z23. Living out their lives to the fullest, these girls get into various shenanigans—slowly but surely!

Azur Lane: Slow Ahead! is an on-going Yonkoma manga spin-off of Azur Lane written by Hori no Su that began syndication on April 23, 2018. Individual chapters are regularly posted on the game's official Japanese and English Twitter accounts, with physical volumes available in Japan. It can also be read on Mangadex

) with chapters being added as they release.

A 12-episode anime adaptation by Yostar Pictures and Studio Candy Box aired in the first quarter of 2021.

Slow Ahead! contains the following tropes: