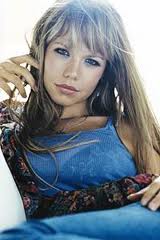 Whatever will be, will be
Tammin Pamela Sursok (born 19 August 1983 in Johannesburg, South Africa) was born to Daryl and Julie Sursok in Johannesburg, South Africa. At the age of 4, she emigrated to Sydney, Australia with her family. Her mother Julie is a classically trained pianist and guitarist and as a result, Sursok was brought up surrounded by music. At a young age, Sursok was involved with the Sydney Youth Musical Theatre, where she pursued her interests in acting, music and dance. She also studied with the Trinity Speech and Drama College and graduated with a high distinction. Sursok was educated at Ravenswood School for Girls, in Gordon, Sydney, studying speech and drama in her final years of school. She won her part in the long-running Australian drama series, Home and Away at the end of 1999 after completing Year 10.
Advertisement:

On 24 August 2011, Sursok married her boyfriend, actor, producer and director Sean McEwen, in Florence, Italy. Sursok signed an exclusive deal with Australian magazine Woman's Day for the wedding photos.In April 2013, Sursok revealed that her movie, Sleeping Around, was filmed in the middle of her wedding. The couple have one child, a daughter, Phoenix Emmanuel (born on 8 October 2013). Sursok also has three dogs, Tiger, Charlie and Sydney

From 2004 to 2005, Sursok was recording her debut album, Whatever Will Be. under Sony BMG Records. To promote the record, she released two singles from the album, prior to its release. The first was "Pointless Relationship" which was successful in Australia. The song was co-written with the Norwegian singer-songwriter Marion Raven, the song debuted at Number 7 on the Australian ARIA Charts, and soon moved up to its peak position of #5. It spent a total twenty weeks in the ARIA Top 100 and was accredited Gold. "Pointless Relationship" was the most added track to radio in its debut week and was #1 on the Australian Top 100 Radio Airplay Chart. The single was planned for a UK release on 5 September 2005 and then 19 September 2005, but was cancelled due to Tammin being contracted to a movie, which failed to materialize. Her next single "Whatever Will Be" was released on 28 March 2005. It was later covered by American singer Vanessa Hudgens for her debut album, V. The full length album was released on 22 May 2005. It was received to positive acclaim. The third and final single "It's a Beautiful Thing" was released on 24 July 2005. It charted 30 on the Australian ARIA Charts and stayed in the top one hundred for twelve weeks.

Sursok took a break from music, but in 2009 she starred in the Nickelodeon Musical film "Spectacular!" The soundtrack was released on 3 February 2009, and recorded in 2008. Sursok appeared on seven songs from the album, including two solos. The soundtrack peaked at #44 on the Billboard 200.

Tropes Present In This Artist