Film / Moscow on the Hudson 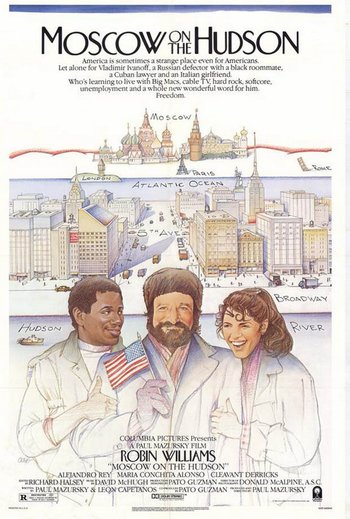 "I can do anything I want. Is America."
— Lucia Lombardo (Maria Conchita Alonso)
Advertisement:

Moscow on the Hudson is a 1984 comedy-drama film directed by Paul Mazursky and starring Robin Williams.

Vladimir Ivanov is a saxophone player for the Moscow circus. Poor and miserable, he endures the long lines and the police breathing down his neck. His friend, Anatoly, lends him his apartment so Vladimir can be alone with his girlfriend. They will be performing in New York City, and Anatoly wishes to defect. Vladimir is approached by the KGB, who wants him to rat out his friend.

During the visit to New York, however, it is Vladimir who ends up seeking asylum. In legal limbo, he can only find low-paying jobs and has to stay with a family living in the slums. Vladimir must learn to cope in this strange land, discover what it holds in store for him, and find out whether or not he can achieve The American Dream.

"Tropes on the Hudson":