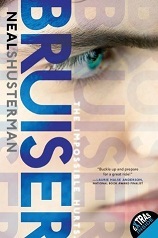 Bruiser is a 2011 teenage novel about Brewster, nicknamed "Bruiser" by his peers for his demeanor, an anti-social teenager with a dark secret, that he takes upon himself the pain and injury of those for whom he cares, and the effect his abilities have on the people around him. The story unfolds from four different perspectives, all written in different styles. Brewster's chapters are written in free verse. His younger brother, Cody, has his chapters in stream-of-consciousness. His girlfriend, Brontë, is written in first-person past-tense while her twin, Tennyson, is written in present tense. Over the course of the book, the four characters learn what the nature of pain is, and why it is necessary to grow as a person.