Series / By The Sword Divided 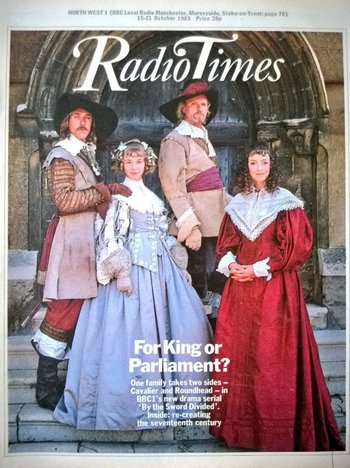 “As a Fletcher and owing obedience and loyalty to my husband, according to my marriage vows, it seems I am now your enemy, rather than your child."
“How cruel and unnatural that sounds, put into words. The thought has caused me many sleepless nights, you may be sure. How many more devoted families throughout this land must find themselves divided by the sword?”

An historical drama series broadcast by the BBC from 1983 to 1985. It was created by John Hawkesworth, who produced a certain other sweeping historical drama about a wealthy family and their servants.

Set during the seventeenth century, By The Sword Divided follows the fortunes of the noble Lacey family, their servants and their home, Arnescote Castle, through the English Civil War and the Interregnum. Sir Martin Lacey and his household are Royalists but his eldest daughter is married to John Fletcher, a leading figure in the Parliamentary cause. Family loyalty and political allegiances are put to the test through intrigue, battle, affairs and other adventures, occasionally involving historical figures from the period.

Tropes in By the Sword Divided include;