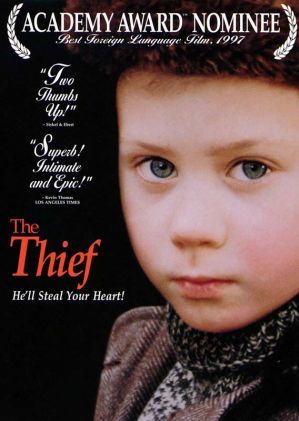 The Thief (Вор) is a 1997 film from Russia, directed by Pavel Chukraj.

It is set in 1952 in the latter days of Josef Stalin's rule. Sanya is a six-year-old boy whose father, a Red Army soldier, died before he was born. Sanya sometimes has visions of the father he never knew. He and his mother Katya are living a desperate existence: as the film opens they are on a train going to nowhere in particular. While on the train they meet Toljan (Vladimir Mashkov), a handsome, charming Red Army officer. After Katya and Toljan have sex on the train she immediately decides that they will live together and Sanya will call him "Daddy". They don't get married, but they pretend to be married in order to get a room in a communal apartment building in a large city.

Katya and Sanya soon discover that Toljan is not as nice as he seemed. They also discover something far worse, that Toljan is not an officer in the army, but a thief. His modus operandi is to infiltrate communal apartments, gain the confidence of the people who live in them, then eventually rob them and skip town. Katya, who is in love, and Sanya, who is desperate for a father figure, join Toljan in a life of crime.

Not to be confused with the 1952 American film noir starring Ray Milland.